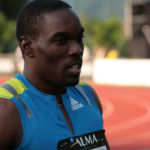 Why Is Dwight Thomas Influential?

According to Wikipedia, Dwight Thomas O.D is a Jamaican sprinter, mainly competing in the 100 metres event and more recently the 110 m hurdles. Career He won the bronze medal at the IAAF World Junior Championships in 1998 at the 100 m and gold medal in the 4 × 100 m relay, competed in the 2000 and 2004 Summer Olympics and finished 5th at the 2005 World Championships. Later in 2005 he placed third at the IAAF World Athletics Final; he was ranked #4 in the world that year by Track & Field News.

Other Resources About Dwight Thomas

What Schools Are Affiliated With Dwight Thomas?

Dwight Thomas is affiliated with the following schools: