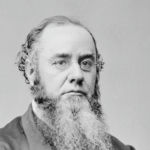 Why Is Edwin Stanton Influential?

According to Wikipedia, Edwin McMasters Stanton was an American lawyer and politician who served as U.S. Secretary of War under the Lincoln Administration during most of the American Civil War. Stanton's management helped organize the massive military resources of the North and guide the Union to victory. However, he was criticized by many Union generals, who perceived him as overcautious and micromanaging. He also organized the manhunt for Abraham Lincoln's assassin, John Wilkes Booth.

Other Resources About Edwin Stanton

What Schools Are Affiliated With Edwin Stanton?

Edwin Stanton is affiliated with the following schools: