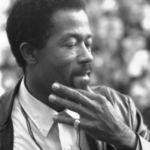 Why Is Eldridge Cleaver Influential?

According to Wikipedia, Leroy Eldridge Cleaver was an American writer and political activist who became an early leader of the Black Panther Party. In 1968, Cleaver wrote Soul on Ice, a collection of essays that, at the time of its publication, was praised by The New York Times Book Review as "brilliant and revealing". Cleaver stated in Soul on Ice: "If a man like Malcolm X could change and repudiate racism, if I myself and other former Muslims can change, if young whites can change, then there is hope for America."

Other Resources About Eldridge Cleaver