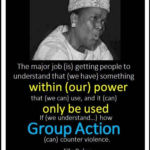 Why Is Ella Baker Influential?

According to Wikipedia, Ella Josephine Baker was an African-American civil rights and human rights activist. She was a largely behind-the-scenes organizer whose career spanned more than five decades. In New York City and the South, she worked alongside some of the most noted civil rights leaders of the 20th century, including W. E. B. Du Bois, Thurgood Marshall, A. Philip Randolph, and Martin Luther King Jr. She also mentored many emerging activists, such as Diane Nash, Stokely Carmichael, and Bob Moses, as leaders in the Student Nonviolent Coordinating Committee .

Other Resources About Ella Baker

What Schools Are Affiliated With Ella Baker?

Ella Baker is affiliated with the following schools: