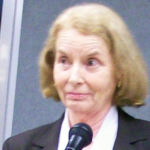 Why Is Ellen Gilchrist Influential?

According to Wikipedia, Ellen Gilchrist is an American novelist, short story writer, and poet. She won a National Book Award for her 1984 collection of short stories, Victory Over Japan. Life Gilchrist was born in Vicksburg, Mississippi, and spent part of her childhood on a plantation owned by her maternal grandparents. She earned a Bachelor of Arts degree in philosophy and studied creative writing under renowned writer Eudora Welty at Millsaps College. Later in life, Gilchrist enrolled in the creative writing program at the University of Arkansas, but she never completed her MFA. Gilchrist has been married and divorced four times and has three children, fourteen grandchildren and two great grandchildren. She lives in Fayetteville, Arkansas, and Ocean Springs, Mississippi. She was a professor of creative writing and contemporary fiction at the University of Arkansas.

Other Resources About Ellen Gilchrist

What Schools Are Affiliated With Ellen Gilchrist?

Ellen Gilchrist is affiliated with the following schools: