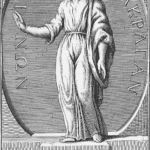 Why Is Empedocles Influential?

According to Wikipedia, Empedocles was a Greek pre-Socratic philosopher and a native citizen of Akragas, a Greek city in Sicily. Empedocles' philosophy is best known for originating the cosmogonic theory of the four classical elements. He also proposed forces he called Love and Strife which would mix and separate the elements, respectively.

Other Resources About Empedocles

What Schools Are Affiliated With Empedocles?

Empedocles is affiliated with the following schools: