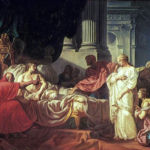 Why Is Erasistratus Influential?

According to Wikipedia, Erasistratus was a Greek anatomist and royal physician under Seleucus I Nicator of Syria. Along with fellow physician Herophilus, he founded a school of anatomy in Alexandria, where they carried out anatomical research. As well, he is credited with helping to found the methodic school of teachings of medicine in Alexandria whilst opposing traditional humoral theories of Hippocratic ideologies. Together, with Herophilus, is credited by historians as the potential founder of neuroscience due to his acknowledgements of nerves and their roles in motor control through the brain and skeletal muscles. Furthermore, Erasistratus is seen as one of the first physicians/scientists to conduct recorded dissections and potential vivisections alongside Herophilus. The two physicians were said by several Roman authors, notably Augustine, Celsus, and Tertullian, to have controversially performed vivisections on criminals to study the anatomy and possible physiology of human organs while they were in Alexandria. Because of their research, Erasistratus and Herophilus were heavily criticized for their utilization of vivisections specifically, namely the author Tertullian who followed Christian values. Erasistratus and Herophilus are thought to be the only physicians to perform dissections on the human body systematically until the Renaissance. He is credited for his description of the valves of the heart, and he also concluded that the heart was not the center of sensations, but instead it functioned as a pump. Erasistratus was among the first to distinguish between veins and arteries. He believed that the arteries were full of air and that they carried the "animal spirit" . He considered atoms to be the essential body element, and he believed they were vitalized by the pneuma that circulated through the nerves. He also thought that the nerves moved a nervous spirit from the brain. He then differentiated between the function of the sensory and motor nerves, and linked them to the brain. He is credited with one of the first in-depth descriptions of the cerebrum and cerebellum. Erasistratus is regarded by some as the founder of physiology.

Other Resources About Erasistratus