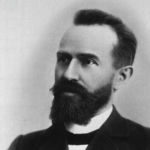 Why Is Eugen Bleuler Influential?

According to Wikipedia, Paul Eugen Bleuler was a Swiss psychiatrist and humanist most notable for his contributions to the understanding of mental illness. He coined several psychiatric terms including "schizophrenia", "schizoid", "autism", depth psychology and what Sigmund Freud called "Bleuler's happily chosen term ambivalence".

Other Resources About Eugen Bleuler

What Schools Are Affiliated With Eugen Bleuler?

Eugen Bleuler is affiliated with the following schools: