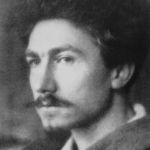 Why Is Ezra Pound Influential?

According to Wikipedia, Ezra Weston Loomis Pound was an expatriate American poet and critic, a major figure in the early modernist poetry movement, and a fascist collaborator in Italy during World War II. His works include Ripostes , Hugh Selwyn Mauberley , and his 800-page epic poem, The Cantos .

Other Resources About Ezra Pound

What Schools Are Affiliated With Ezra Pound?

Ezra Pound is affiliated with the following schools:

What Are Ezra Pound's Academic Contributions?

Ezra Pound has made the following academic contributions: