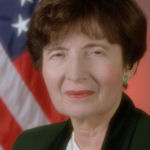 Why Is Faye Glenn Abdellah Influential?

According to Wikipedia, Faye Glenn Abdellah was an American pioneer in nursing research. Abdellah was the first nurse and woman to serve as the Deputy Surgeon General of the United States. Preceding her appointment, she served in active duty during the Korean War, where she earned a distinguished ranking equivalent to a Navy Rear Admiral, making her the highest ranked woman and nurse in the Federal Nursing Services at the time. In addition to these achievements, Abdellah led the formation of the National Institute of Nursing Research at the NIH, and was the founder and first dean of the Graduate School of Nursing at the Uniformed Services University of the Health Sciences . A few of Abdellah's more passionate interests in public health included the importance of long-term care planning for elderly patients; the need to strengthen nursing school infrastructure; and the necessity of patient-centered approaches in nursing. In 2000 Abdellah was inducted into the National Women's Hall of Fame. During her acceptance speech, Abdellah made the following quote: "We cannot wait for the world to change . . . Those of us with intelligence, purpose, and vision must take the lead and change the world . . . I promise never to rest until my work has been completed!”

Other Resources About Faye Glenn Abdellah

What Schools Are Affiliated With Faye Glenn Abdellah?

Faye Glenn Abdellah is affiliated with the following schools: