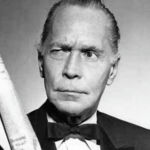 Why Is Franchot Tone Influential?

According to Wikipedia, Stanislaus Pascal Franchot Tone was an American actor, producer, and director of stage, film and television. He was a leading man in the 1930s and early 1940s, and at the height of his career was known for his gentlemanly sophisticate roles, with supporting roles by the 1950s. His acting crossed many genres including pre-Code romantic leads to noir layered roles and many World War I films. He appeared as a guest star in episodes of several golden age television series, including The Twilight Zone and The Alfred Hitchcock Hour while continuing to act and produce in the theater and movies throughout the 1960s.

Other Resources About Franchot Tone

What Schools Are Affiliated With Franchot Tone?

Franchot Tone is affiliated with the following schools: