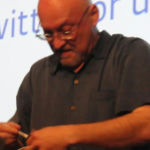 Why Is Frank Darabont Influential?

According to Wikipedia, Frank Árpád Darabont is an American film director, screenwriter and producer. He has been nominated for three Academy Awards and a Golden Globe Award. In his early career, he was primarily a screenwriter for such horror films as A Nightmare on Elm Street 3: Dream Warriors , The Blob and The Fly II . As a director, he is known for his film adaptations of Stephen King novellas and novels, such as The Shawshank Redemption , The Green Mile , and The Mist .

Other Resources About Frank Darabont