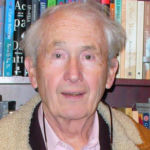 Why Is Frank McCourt Influential?

According to Wikipedia, Francis McCourt was an Irish-American teacher and writer. He won a Pulitzer Prize for his book Angela's Ashes, a tragicomic memoir of the misery and squalor of his childhood. Early life and education Frank McCourt was born in New York City's Brooklyn borough, on August 19, 1930, the eldest child of Irish Catholic immigrants Malachy Gerald McCourt, Sr. , of Toome, County Antrim, Northern Ireland, who was aligned with the IRA during the Irish War of Independence, and Angela Sheehan from Limerick. Frank McCourt lived in New York with his parents and four younger siblings: Malachy, born in 1931; twins Oliver and Eugene, born in 1932; and a younger sister, Margaret, who died just 21 days after birth, on March 5, 1934.

Other Resources About Frank McCourt

What Schools Are Affiliated With Frank McCourt?

Frank McCourt is affiliated with the following schools:

What Are Frank McCourt's Academic Contributions?

Frank McCourt has made the following academic contributions: