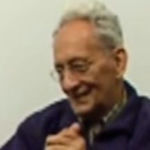 Why Is Frank Stella Influential?

According to Wikipedia, Frank Philip Stella is an American painter, sculptor and printmaker, noted for his work in the areas of minimalism and post-painterly abstraction. Stella lives and works in New York City. Biography Frank Stella was born in Malden, Massachusetts, to parents of Italian descent. His father was a gynecologist, and his mother was a housewife and artist who attended fashion school and later took up landscape painting.

Other Resources About Frank Stella

What Schools Are Affiliated With Frank Stella?

Frank Stella is affiliated with the following schools: