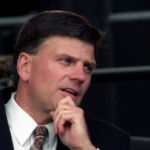 Why Is Franklin Graham Influential?

According to Wikipedia, William Franklin Graham III is an American evangelist and missionary. He frequently engages in Christian revival tours and political commentary. He is president and CEO of the Billy Graham Evangelistic Association and of Samaritan's Purse, an international Christian relief organization. Graham became a "committed Christian" in 1974 and was ordained in 1982, and has since become a public speaker and author. He is a son of the American evangelist Billy Graham.

Other Resources About Franklin Graham

What Schools Are Affiliated With Franklin Graham?

Franklin Graham is affiliated with the following schools: