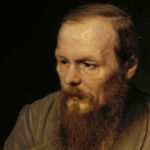 Why Is Fyodor Dostoevsky Influential?

According to Wikipedia, Fyodor Mikhailovich Dostoevsky , sometimes transliterated as Dostoyevsky, was a Russian novelist, short story writer, essayist, and journalist. Dostoevsky's literary works explore the human condition in the troubled political, social, and spiritual atmospheres of 19th-century Russia, and engage with a variety of philosophical and religious themes. His most acclaimed novels include Crime and Punishment , The Idiot , Demons , and The Brothers Karamazov . His 1864 novella Notes from Underground is considered to be one of the first works of existentialist literature. Numerous literary critics rate him as one of the greatest novelists in all of world literature, as many of his works are considered highly influential masterpieces.

Other Resources About Fyodor Dostoevsky

What Schools Are Affiliated With Fyodor Dostoevsky?

Fyodor Dostoevsky is affiliated with the following schools:

What Are Fyodor Dostoevsky's Academic Contributions?

Fyodor Dostoevsky has made the following academic contributions: