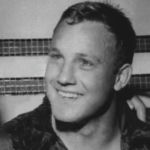 Why Is George Harrison Influential?

According to Wikipedia, George Prifold Harrison was an American competition swimmer, Olympic champion, and former world record-holder in three events. He competed at the 1960 Summer Olympics in Rome, where he received a gold medal as the lead-off swimmer of the winning U.S. team in the 4×200-meter freestyle relay. Harrison, together with his American relay teammates Dick Blick, Mike Troy and Jeff Farrell, set a new world record of 8:10.2 in the event final.

Other Resources About George Harrison

What Schools Are Affiliated With George Harrison ?

George Harrison is affiliated with the following schools: