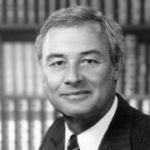 American politician who served as Mayor of San Francisco

Why Is George Moscone Influential?

According to Wikipedia, George Richard Moscone was an American attorney and Democratic politician. He was the 37th mayor of San Francisco, California from January 1976 until his assassination in November 1978. He was known as "the people's mayor", who opened up City Hall and its commissions to reflect the diversity of San Francisco. Moscone served in the California State Senate from 1967 until becoming Mayor. In the Senate, he served as Majority Leader.

Other Resources About George Moscone

What Schools Are Affiliated With George Moscone?

George Moscone is affiliated with the following schools: