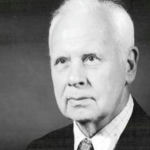 Bell Labs researcher; one of the fathers of the modern first digital computer

Why Is George Stibitz Influential?

According to Wikipedia, George Robert Stibitz was a Bell Labs researcher internationally recognized as one of the fathers of the modern digital computer. He was known for his work in the 1930s and 1940s on the realization of Boolean logic digital circuits using electromechanical relays as the switching element.

Other Resources About George Stibitz

What Schools Are Affiliated With George Stibitz?

George Stibitz is affiliated with the following schools: