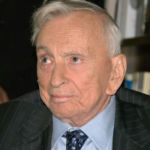 Why Is Gore Vidal Influential?

According to Wikipedia, Eugene Luther Gore Vidal was an American writer and public intellectual known for his epigrammatic wit, erudition, and patrician manner. Vidal was bisexual, and in his novels and essays interrogated the social and cultural sexual norms he perceived as driving American life. Beyond literature, Vidal was heavily involved in politics. He twice sought office—unsuccessfully—as a Democratic Party candidate, first in 1960 to the U.S. House of Representatives , and later in 1982 to the U.S. Senate .

Other Resources About Gore Vidal

What Are Gore Vidal's Academic Contributions?

Gore Vidal has made the following academic contributions: