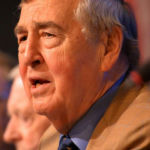 Why Is Graham Allison Influential?

According to Wikipedia, Graham Tillett Allison Jr. is an American political scientist and the Douglas Dillon Professor of Government at the John F. Kennedy School of Government at Harvard University. He is renowned for his contribution in the late 1960s and early 1970s to the bureaucratic analysis of decision making, especially during times of crisis. His book Remaking Foreign Policy: The Organizational Connection, co-written with Peter Szanton, was published in 1976 and had some influence on the foreign policy of the administration of President Jimmy Carter who took office in early 1977. Since the 1970s, Allison has also been a leading analyst of U.S. national security and defense policy, with a special interest in nuclear weapons and terrorism.

Other Resources About Graham Allison

What Schools Are Affiliated With Graham Allison?

Graham Allison is affiliated with the following schools:

What Are Graham Allison's Academic Contributions?

Graham Allison has made the following academic contributions: