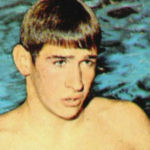 Why Is Graham Windeatt Influential?

According to Wikipedia, Graham Claude Windeatt is an Australian former long-distance freestyle swimmer of the 1970s, who won a silver medal in the 1500-metre freestyle at the 1972 Summer Olympics in Munich. In 1971 as a school student Windeatt broke the men's world 800-metre freestyle record in the NSW Combined High Schools Swimming Championships held at North Sydney pool.

Other Resources About Graham Windeatt

What Schools Are Affiliated With Graham Windeatt?

Graham Windeatt is affiliated with the following schools: