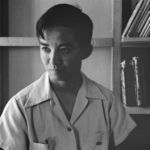 Why Is Harvey Itano Influential?

According to Wikipedia, Harvey Akio Itano was an American biochemist best known for his work on the molecular basis of sickle cell anemia and other diseases. In collaboration with Linus Pauling, Itano used electrophoresis to demonstrate the difference between normal hemoglobin and sickle cell hemoglobin; their 1949 paper "Sickle Cell Anemia, a Molecular Disease" was a landmark in both molecular medicine and protein electrophoresis.

Other Resources About Harvey Itano

What Schools Are Affiliated With Harvey Itano?

Harvey Itano is affiliated with the following schools: