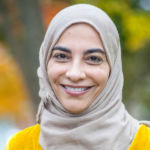 Why Is Hayat Sindi Influential?

According to Wikipedia, Dr. Hayat AlSindi is a Saudi Arabian medical scientist and one of the first female members of the Consultative Assembly of Saudi Arabia. She is famous for making major contributions to point-of-care medical testing and biotechnology. She was ranked by Arabian Business as the 19th most influential Arab in the world and the ninth most influential Arab woman. In 2018, she was listed as one of BBC's 100 Women.

Other Resources About Hayat Sindi

What Schools Are Affiliated With Hayat Sindi?

Hayat Sindi is affiliated with the following schools: