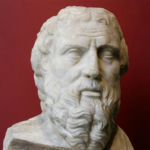 5th century BC Greek historian and author of The Histories

Why Is Herodotus Influential?

According to Wikipedia, Herodotus was an ancient Greek historian and geographer from the Greek city of Halicarnassus, part of the Persian Empire . He is known for having written the Histories – a detailed account of the Greco-Persian Wars. Herodotus was the first writer to do systematic investigation of historical events. He is referred to as "The Father of History", a title conferred on him by the ancient Roman orator Cicero.

Other Resources About Herodotus

What Are Herodotus's Academic Contributions?

Herodotus has made the following academic contributions: