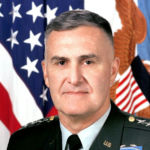 Why Is Hugh Shelton Influential?

According to Wikipedia, Henry Hugh Shelton is a former United States Army officer who served as the 14th chairman of the Joint Chiefs of Staff from 1997 to 2001. Early life, family and education Shelton was born in Tarboro, North Carolina. Shelton attended North Carolina State University, and was a member of Pershing Rifles. He earned a Bachelor of Science degree in textile engineering while earning his Army commission through Reserve Officers' Training Corps training. Shelton's further education includes a Master of Science degree in political science from Auburn University at Montgomery in 1973 as well as studies at the Air Command and Staff College and the National War College. Shelton married Carolyn L. Johnson in 1963; the pair have three sons together.

Other Resources About Hugh Shelton

What Schools Are Affiliated With Hugh Shelton?

Hugh Shelton is affiliated with the following schools: