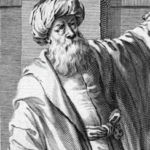 Why Is Ibn al-Haytham Influential?

According to Wikipedia, Ḥasan Ibn al-Haytham, Latinized as Alhazen , was a Muslim Arab mathematician, astronomer, and physicist of the Islamic Golden Age. Referred to as "the father of modern optics", he made significant contributions to the principles of optics and visual perception in particular. His most influential work is titled Kitāb al-Manāẓir , written during 1011–1021, which survived in a Latin edition. A polymath, he also wrote on philosophy, theology and medicine.

Other Resources About Ibn al-Haytham