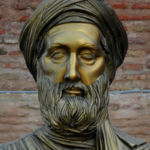 Why Is Ibn Khaldun Influential?

According to Wikipedia, Ibn Khaldun was an Arab sociologist, philosopher and historian who has been described as the precursive founder of the proto-disciplines that would become historiography, sociology, economics, and demography. Niccolò Machiavelli of the Renaissance, Georg Wilhelm Friedrich Hegel and 19th-century European scholars widely acknowledged the significance of his works and considered Ibn Khaldun to be one of the greatest philosophers of the Middle Ages.

Other Resources About Ibn Khaldun

What Schools Are Affiliated With Ibn Khaldun?

Ibn Khaldun is affiliated with the following schools:

What Are Ibn Khaldun's Academic Contributions?

Ibn Khaldun has made the following academic contributions: