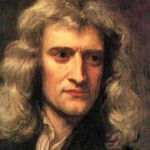 Why Is Isaac Newton Influential?

According to Wikipedia, Sir Isaac Newton was an English mathematician, physicist, astronomer, alchemist, theologian, and author widely recognised as one of the greatest mathematicians and physicists of all time and among the most influential scientists. He was a key figure in the philosophical revolution known as the Enlightenment. His book Philosophiæ Naturalis Principia Mathematica , first published in 1687, established classical mechanics. Newton also made seminal contributions to optics, and shares credit with German mathematician Gottfried Wilhelm Leibniz for developing infinitesimal calculus.

Other Resources About Isaac Newton

What Schools Are Affiliated With Isaac Newton?

Isaac Newton is affiliated with the following schools:

What Are Isaac Newton's Academic Contributions?

Isaac Newton has made the following academic contributions: