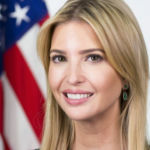 Why Is Ivanka Trump Influential?

According to Wikipedia, Ivana Marie "Ivanka" Trump is an American businesswoman and the daughter of former President Donald Trump; she was a senior advisor in his administration, and also was the director of the Office of Economic Initiatives and Entrepreneurship. She is the daughter of Trump's first wife, Ivana, and is the first Jewish member of a first family, having converted before marrying her husband, Jared Kushner.

Other Resources About Ivanka Trump

What Schools Are Affiliated With Ivanka Trump?

Ivanka Trump is affiliated with the following schools:

What Are Ivanka Trump's Academic Contributions?

Ivanka Trump has made the following academic contributions: