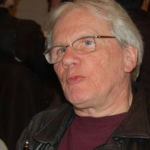 Why Is Jack Dann Influential?

According to Wikipedia, Jack Dann is an American writer best known for his science fiction, an editor and a writing teacher, who has lived in Australia since 1994. He has published over seventy books, in the majority of cases as editor or co-editor of story anthologies in the science fiction, fantasy and horror genres. He has published nine novels, numerous shorter works of fiction, essays and poetry and his books have been translated into thirteen languages. His work, which includes fiction in the science fiction, fantasy, horror, magical realism and historical and alternative history genres, has been compared to Jorge Luis Borges, Roald Dahl, Lewis Carroll, J.G. Ballard, and Philip K. Dick.

Other Resources About Jack Dann

What Schools Are Affiliated With Jack Dann?

Jack Dann is affiliated with the following schools:

What Are Jack Dann's Academic Contributions?

Jack Dann has made the following academic contributions: