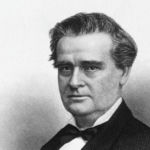 Why Is J. Marion Sims Influential?

According to Wikipedia, James Marion Sims was an American physician in the field of surgery, known as the "father of modern gynecology" – but also as a controversial figure, due to the ethical questions raised by how he developed his techniques. His most significant work was the development of a surgical technique for the repair of vesicovaginal fistula, a severe complication of obstructed childbirth. He is also remembered for inventing Sims' speculum, Sims' sigmoid catheter, and the Sims' position. However, as medical ethicist Barron H. Lerner states, "one would be hard pressed to find a more controversial figure in the history of medicine."

Other Resources About J. Marion Sims

What Schools Are Affiliated With J. Marion Sims?

J. Marion Sims is affiliated with the following schools: