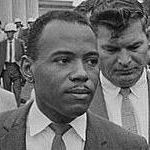 Why Is James Meredith Influential?

According to Wikipedia, James Howard Meredith is the first African-American student admitted to the racially segregated University of Mississippi. He is also an American civil rights movement figure, writer, political adviser, and Air Force veteran. It was in 1962 that Meredith became the first African-American student admitted to the theretofore segregated University of Mississippi, after the intervention of the federal government, an event that was a flashpoint in the civil rights movement. Inspired by President John F. Kennedy's inaugural address, Meredith decided to exercise his constitutional rights and apply to the University of Mississippi. His goal was to put pressure on the Kennedy administration to enforce civil rights for African Americans.

Other Resources About James Meredith

What Schools Are Affiliated With James Meredith?

James Meredith is affiliated with the following schools: