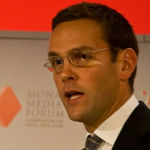 Why Is James Murdoch Influential?

According to Wikipedia, James Rupert Jacob Murdoch is a British-American businessman, the younger son of media mogul Rupert Murdoch, and was the chief executive officer of 21st Century Fox from 2015 to 2019. He was the chairman and CEO for Europe and Asia of News Corporation until 2013 when it was split into News Corp and 21st Century Fox. He was formerly a director of News Corp and was a member of the office of the chairman.

Other Resources About James Murdoch

What Schools Are Affiliated With James Murdoch?

James Murdoch is affiliated with the following schools: