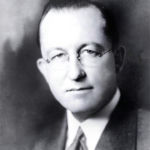 Why Is James O. McKinsey Influential?

McKinsey grew up in Missouri where he attended the Warrensburg Teachers College (since renamed as the University of Central Missouri) where he earned his Bachelor of Pedagogy. He then proceeded to the University of Arkansas to study law, attaining his degree in only one year. Following his law degree, McKinsey received his Master of Art in Commerce from the University of Chicago and passed his Certified Public Accountant (CPA) exam.

McKInsey taught accounting at the University of Chicago intermittently from 1917-1935. He was also involved in several boards and committees including his position as chairman of the board at Marshall Field and Company and chairman of the American Management Association.

McKinsey wrote many volumes on accounting and related matters including Bookkeeping and Accounting, Principles of Accounting, and Budgetary Control.

McKinsey and Company is a management consulting firm that McKinsey established in 1926 during his tenure at the University of Chicago. It is known as one of the “Big Three,” the name give to the world’s three largest consulting firms.

According to Wikipedia, James Oscar McKinsey was an American accountant, management consultant, professor of accounting at the University of Chicago, and founder of McKinsey & Company. Biography Youth, education and early career McKinsey was born in 1889 in Gamma, Missouri, son of James Madison McKinsey and Mary Elizabeth McKinsey. After attending regular public school, McKinsey initially received training as a teacher at the Warrensburg Teachers College, now University of Central Missouri, where in 1912 he obtained his Bachelor of Pedagogy.

Other Resources About James O. McKinsey

What Schools Are Affiliated With James O. McKinsey?

James O. McKinsey is affiliated with the following schools: