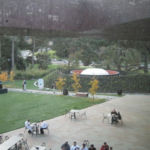 Why Is James Turrell Influential?

According to Wikipedia, James Turrell is an American artist known for his work within the Light and Space movement. Much of Turrell's career has been devoted to a still-unfinished work, Roden Crater, a natural cinder cone crater located outside Flagstaff, Arizona, that he is turning into a massive naked-eye observatory; and for his series of skyspaces, enclosed spaces that frame the sky.

Other Resources About James Turrell

What Schools Are Affiliated With James Turrell?

James Turrell is affiliated with the following schools: