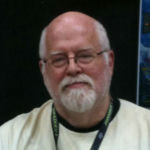 Why Is Jeff Easley Influential?

According to Wikipedia, Jeff Easley is an oil painter who creates fantasy artwork for role-playing games, comics, and magazines, as well as non-fantasy commercial art. Early life Easley was born in Nicholasville, Kentucky in 1954. He spent time drawing as a child, particularly creatures such as ghosts and monsters. "I watched lots of monster movies on the late show, and built every monster model kit I could get my hands on," he said. He attended high school in Nicholasville, and then earned a Bachelor of Fine Arts in painting from Murray State University in Kentucky.

Other Resources About Jeff Easley

What Schools Are Affiliated With Jeff Easley?

Jeff Easley is affiliated with the following schools: