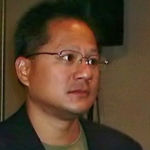 Taiwanese-American entrepreneur and businessman; founder and CEO of Nvidia

Why Is Jensen Huang Influential?

According to Wikipedia, Jen-Hsun "Jensen" Huang is a Taiwanese-American billionaire business magnate, electrical engineer, and co-founder of Nvidia Corporation, where he currently serves as president and CEO. Early years and education Huang was born in Tainan, Taiwan. His family emigrated to the United States when he was 9 years old, first living in Oneida, Kentucky, and settling in Oregon. He graduated from Aloha High School, outside Portland.

Other Resources About Jensen Huang

What Schools Are Affiliated With Jensen Huang?

Jensen Huang is affiliated with the following schools: