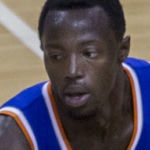 Why Is Jerian Grant Influential?

According to Wikipedia, Holdyn Jerian Grant is an American professional basketball player for Türk Telekom of the Basketbol Süper Ligi . He played college basketball with the University of Notre Dame and was considered one of the top college players in the nation for the 2014–15 season. After being selected with the 19th overall pick by the Washington Wizards in the 2015 NBA draft, his rights were sent to the Atlanta Hawks and then moved again to the New York Knicks on draft night.

Other Resources About Jerian Grant

What Schools Are Affiliated With Jerian Grant?

Jerian Grant is affiliated with the following schools: