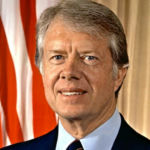 Why Is Jimmy Carter Influential?

According to Wikipedia, James Earl Carter Jr. is an American former politician who served as the 39th president of the United States from 1977 to 1981. A member of the Democratic Party, he previously served as the 76th governor of Georgia from 1971 to 1975 and as a Georgia state senator from 1963 to 1967. Since leaving office, Carter has remained engaged in political and social projects, receiving the Nobel Peace Prize in 2002 for his humanitarian work.

Other Resources About Jimmy Carter

What Schools Are Affiliated With Jimmy Carter?

Jimmy Carter is affiliated with the following schools:

What Are Jimmy Carter's Academic Contributions?

Jimmy Carter has made the following academic contributions: