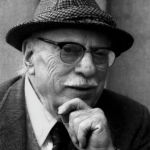 Why Is Joe Rosenthal Influential?

According to Wikipedia, Joseph John Rosenthal was an American photographer who received the Pulitzer Prize for his iconic World War II photograph Raising the Flag on Iwo Jima, taken during the 1945 Battle of Iwo Jima. His picture became one of the best-known photographs of the war, and was replicated as the United States Marine Corps War Memorial in Arlington, Virginia.

Other Resources About Joe Rosenthal

What Schools Are Affiliated With Joe Rosenthal?

Joe Rosenthal is affiliated with the following schools: