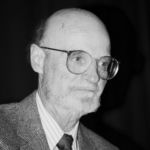 Why Is John Barth Influential?

According to Wikipedia, John Simmons Barth is an American writer who is best known for his postmodern and metafictional fiction. His most highly regarded and influential works were published in the 1960s, and include The Sot-Weed Factor, a satirical retelling of Maryland's colonial history, and Lost in the Funhouse, a self-referential and experimental collection of short stories. Though Barth's work has been controversial among critics and readers, he was co-recipient of the National Book Award in 1973 for his novel Chimera with John Williams for Augustus. Despite Barth's influence on postmodern literature in America, his influence and publicity have decreased since his novels were published.

Other Resources About John Barth

What Schools Are Affiliated With John Barth?

John Barth is affiliated with the following schools:

What Are John Barth's Academic Contributions?

John Barth has made the following academic contributions: