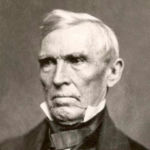 Why Is John J. Crittenden Influential?

According to Wikipedia, John Jordan Crittenden was an American statesman and politician from the U.S. state of Kentucky. He represented the state in the U.S. House of Representatives and the U.S. Senate and twice served as United States Attorney General in the administrations of William Henry Harrison, John Tyler, and Millard Fillmore. He was also the 17th governor of Kentucky and served in the state legislature. Although frequently mentioned as a potential candidate for the U.S. presidency, he never consented to run for the office.

Other Resources About John J. Crittenden

What Schools Are Affiliated With John J. Crittenden?

John J. Crittenden is affiliated with the following schools: