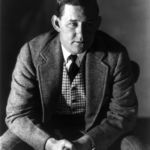 Why Is John O'Hara Influential?

According to Wikipedia, John Henry O'Hara was one of America's most prolific writers of short stories, credited with helping to invent The New Yorker magazine short story style. He became a best-selling novelist before the age of 30 with Appointment in Samarra and BUtterfield 8. While O'Hara's legacy as a writer is debated, his champions rank him highly among the under-appreciated and unjustly neglected major American writers of the 20th century. Few college students educated after O'Hara's death in 1970 have discovered him, chiefly because he refused to allow his work to be reprinted in anthologies used to teach literature at the college level.

Other Resources About John O'Hara

What Schools Are Affiliated With John O'Hara?

John O'Hara is affiliated with the following schools:

What Are John O'Hara's Academic Contributions?

John O'Hara has made the following academic contributions: