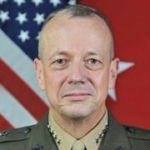 Why Is John R. Allen Influential?

According to Wikipedia, John Rutherford Allen is a retired United States Marine Corps four-star general, and former commander of the NATO International Security Assistance Force and U.S. Forces – Afghanistan . On September 13, 2014, President Barack Obama appointed Allen as special presidential envoy for the Global Coalition to Counter ISIL . He was succeeded in that role by Brett McGurk on October 23, 2015. He is the co-author of Turning Point: Policymaking in the Era of Artificial Intelligence with Darrell M. West and Future War and the Defence of Europe alongside LTG Frederick “Ben” Hodges and Professor Julian Lindley French . Allen was president of the Brookings Institution from October 2017 until his resignation on June 12, 2022; he had been placed on administrative leave four days earlier after public reports he was under investigation by the FBI for lobbying on behalf of Qatar.

Other Resources About John R. Allen

What Schools Are Affiliated With John R. Allen?

John R. Allen is affiliated with the following schools: