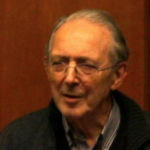 Why Is Jon Sobrino Influential?

According to Wikipedia, Jon Sobrino is a Jesuit Catholic priest and theologian, known mostly for his contributions to Latin American liberation theology. He received worldwide attention in 2007 when the Vatican's Congregation for the Doctrine of the Faith issued a notification for what they termed doctrines that are "erroneous or dangerous and may cause harm to the faithful."

Other Resources About Jon Sobrino

What Schools Are Affiliated With Jon Sobrino?

Jon Sobrino is affiliated with the following schools: