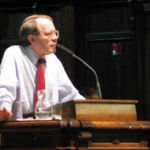 Why Is Jonathan Kozol Influential?

According to Wikipedia, Jonathan Kozol is an American writer, progressive activist, and educator, best known for his books on public education in the United States. Education and experience Born to Harry Kozol and Ruth Kozol, Jonathan graduated from Noble and Greenough School in 1954, and Harvard University summa cum laude in 1958 with an A.B. in English literature. He was awarded a Rhodes Scholarship to Magdalen College, Oxford. He did not, however, complete his scholarship, deciding instead to go to Paris to learn to write fiction and nonfiction from experienced authors such as William Styron, Richard Wright, and others who were living in Paris at the time. It was upon his return that he began to tutor children in Roxbury, MA, and soon became a teacher in the Boston Public Schools. He was fired for teaching a Langston Hughes poem, as described in Death at an Early Age, and then became deeply involved in the civil rights movement. After being fired from Boston Public Schools, he was offered a position to teach at Newton Public Schools, the school district he attended as a child, and taught there for several years before becoming more deeply involved in social justice work and dedicating more time to writing. Kozol is of Jewish heritage.

Other Resources About Jonathan Kozol

What Schools Are Affiliated With Jonathan Kozol?

Jonathan Kozol is affiliated with the following schools:

What Are Jonathan Kozol's Academic Contributions?

Jonathan Kozol has made the following academic contributions: