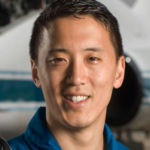 Why Is Jonny Kim Influential?

According to Wikipedia, Jonathan Yong Kim , also called Jonny Kim, is an American US Navy lieutenant commander , physician, and NASA astronaut. Born and raised in California, Kim enlisted in the United States Navy in the early 2000s before earning a Silver Star and his commission. While a US sailor, Kim also received his Bachelor of Arts in mathematics, his Doctor of Medicine, and an acceptance to NASA Astronaut Group 22 in 2017. He completed his astronaut training in 2020 and was awaiting a flight assignment with the Artemis program .

Other Resources About Jonny Kim

What Schools Are Affiliated With Jonny Kim?

Jonny Kim is affiliated with the following schools: