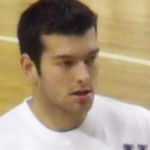 Why Is Josh Harrellson Influential?

According to Wikipedia, Josh Douglas Harrellson is an American professional basketball player for Osaka Evessa of the Japanese B.League. Standing , he played center for the Kentucky Wildcats from 2008 to 2011. He was selected by the New Orleans Hornets as the 45th pick in the 2011 NBA draft, but was traded to the New York Knicks. He signed with the Miami Heat in 2012. In 2013, he joined the Brujos de Guayama in Puerto Rico, but he was released on May 18 so that he could join Chongqing Flying Dragons in the Chinese National Basketball League for a two-month period. In August 2013, Harrellson joined the Detroit Pistons.

Other Resources About Josh Harrellson

What Schools Are Affiliated With Josh Harrellson?

Josh Harrellson is affiliated with the following schools: