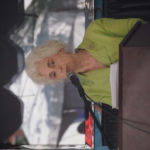 Why Is Judith Martin Influential?

According to Wikipedia, Judith Martin , better known by the pen name Miss Manners, is an American columnist, author, and etiquette authority. Early life and career Martin is the daughter of Helen and Jacob Perlman. Her father was born in 1898 in Białystok, then part of the Russian Empire, now in Poland. He immigrated to the United States in 1912. In 1925, he received his doctorate from the University of Wisconsin, in economics. Jacob married Helen Aronson in 1935, and they moved to Washington, D.C., where Martin was born in 1938.

Other Resources About Judith Martin

What Schools Are Affiliated With Judith Martin?

Judith Martin is affiliated with the following schools: